The life and works of the mystic of Viareggio have been examined by international scholars who have pointed out the astonishing agreement between her visions and the times of Jesus. 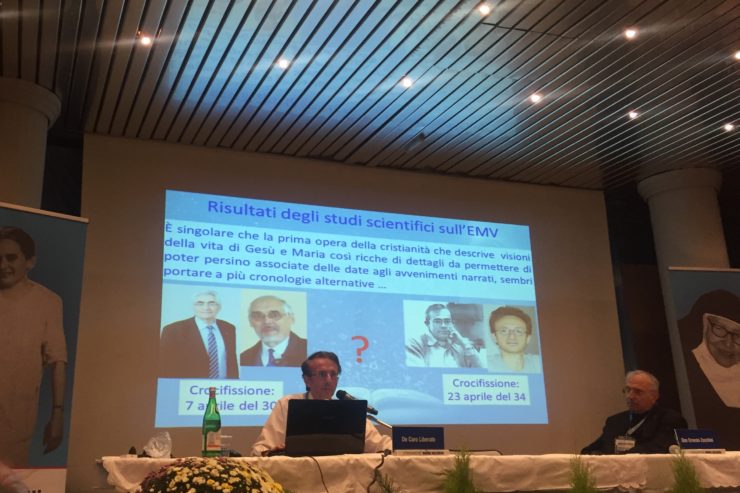 Many wonder who Maria Valtorta is and why her life and her writings capture so much attention, and it is precisely for those who are still unaware of her that the Valtorta Foundation has organized a first international conference to become familiar with the prodigies of the mystic of Viareggio, who is known in the United States, Canada, Europe, Oceania, Australia, as well as Italy, where she lived until her death, in 1961.

A two-day conference, on October 22 and 23, 2016, to get to know her work L’Evangelo come mi è stato rivelato [The Gospel as Revealed to Me], which recounts the life of Jesus, of his mother, Mary, and of all the apostles, in a clear and simple way, and enriched with more facts than the canonical Gospels of Luke, John, Matthew, and Mark. Certain aspects were examined in particular: the astronomical and geological data that scientifically correspond between Valtorta’s narrative and the skies of two thousand years ago, as attested by NASA programs. And it is precisely the scientific data that amazes and captures our attention. Many scientists over the course of the years – astronomers, physicists, and geologists – have approached her work, at first with the intention of contesting it, but in the end being fascinated and astounded by the vividness of her descriptions, which meticulously illustrate the climatic conditions of those days, the many places in the Holy Land that are unknown to most people, and the movements of the stars and planets that shone at that time in the skies, all of which have been scientifically proven.

Among the first to become passionate and to undertake research was the French engineer Jean-François Lavère – who was absent from the conference for personal reasons. For 25 years, he studied Valtorta’s work systematically, collecting more than 10,000 pieces of evidence in various fields, including the arts, astronomy, fauna, ethnology, geography, geology, history and geopolitics, metrology, the social sciences and religion, analyzing them and comparing them with different sources. The result published in his Enigma Valtorta I (2012) and Enigma Valtorta II (2016) is a scientific validation of 99.6% of the data: an outcome, to say the least, disconcerting for a simple woman like Maria Valtorta, confined to her bed, semi-paralyzed since 1934, who had neither the technical instruments to reconstruct such a distant era nor the cognitive means.

In the same vein as Lavère, ranks the work of another engineer, Stephen Austin, from the United States, a young thirty-year old man. He originally ran up against this mystic’s work for the sole purpose of repudiating it, but he then ended up subdued by the completeness and beauty of her The Poem of the Man-God (now known as The Gospel as Revealed to Me) to such extent that he dedicated four years of research to compile his e-book in English A Summa & Encyclopedia to Maria Valtorta’s Extraordinary Work and present it to the public, at this first International meeting. Constantly updated, Stephen’s work has 13 chapters and 49 subchapters, in which he introduces The Gospel as Revealed to Me to readers. The theological objections of the Church against private revelations are eviscerated in this e-book by a careful investigation of the approval that Valtorta’s work has received from saints and prelates: Saint Padre Pio and Saint Teresa of Calcutta; Pope Pius XII; cardinals, archbishops and bishops; 23 doctors of theology, divinity, or canon law; 16 university professors; etc. Stephen Austin then compares Valtorta’s visions with those of the other mystics, Blessed Anne Catherine Emmerich and Venerable Mary of Agreda, both of which are less detailed and less accurate. He also emphasizes the almost absolute correlation between the Gospel and the text of Viareggio’s mystic, with the difference that, compared with the 141 days of Jesus’ ministry in the Sacred Scriptures, there are in The Gospel as Revealed to Me about 500 days, presented in much greater detail, historically valid, on account of the valuable and unique information on botany, geography, ethnology, and astronomy. Austin’s e-book is known as far as Oceania and Australia, thanks to his promotional work, which included participating in an interview on the Australian TV program of a religious nature Spirit of Life.

From the astronomical point of view, the studies are diversified. Noteworthy among these for its accuracy and exhaustiveness is the research of the Italian Liberato De Caro, physicist and researcher of the Centro Nazionale di Ricerche [National Research Center], who has investigated the mystic’s work from the historical-astronomical point of view, verifying the night sky proposed by her with a map of the sky from NASA software programs. His 2014 book I cieli raccontano [The Heavens Declare] establishes that the Crucifixion of Jesus – as opposed to the date A.D. 30 chosen by Lavère, who attributes to the mystic a greater error percentage – would have occurred on April 23 of A.D. 34 (Julian calendar) in the [Jewish] month of Nisan, during an embolismic year (that is, a year with 13 lunar months). A result that certifies the mystic’s reliability – whose error percentage is less than 0.84% – by explaining how the Passover, for two years in a row, would have fallen on a Friday: something impossible in the Hebrew calendar, except for this particular year, A.D. 34. Of great help was the accurate description of the vault of heaven on March 15 of A.D. 33 (Julian) near the Baths of Gadara – dated as such on the basis of the astronomical positions supplied by The Gospel as Revealed to Me – reported in detail by the mystic who describes exactly the position of Mars and the constellations, as if she had been an eyewitness.

The same conclusions have been reached also by a geologist, Thomas Dubé, of Seattle, U.S.A. For 25 years, he has analyzed the historical-chronological correspondence between the Gospels and The Gospel as Revealed to Me, in order to reconstruct the crucial aspects of the nativity of Jesus. For the scientist, who calculated the differences between the Hebrew and Gregorian calendars and compared his results with the studies of the theoretical physicist Dr. Lonnie Lee Van Zandt, Jesus would have lived 1738 weeks and one day, and would have therefore been born during the night of December 27/28 of 1 B.C. [Gregorian, or December 29/30 in Julian] and crucified in A.D. 34, on April 23 (Julian calendar), which coincides with April 21, A.D. 34 according to our [Gregorian] calendar. Such a concurrence between two previously unknown scholars shows the scientific reliability of Valtorta’s writings, which have enabled two men from different continents and professions to arrive at the same results.

Universality, clarity, and specificity are the cornerstones of Valtorta’s message, as it is through those intrinsic characteristics that it has conquered more and more the attention of scientists, saints, theologians, and ordinary people, thus promoting the spreading of the message of Christ throughout the world, with no harm to the doctrine of the Church – in fact contributing to the evangelization of the most skeptical.

Translated from the original Italian article on Zenit News, with permission of the author.