What is the Position of the Church on Maria Valtorta’s Main Work? 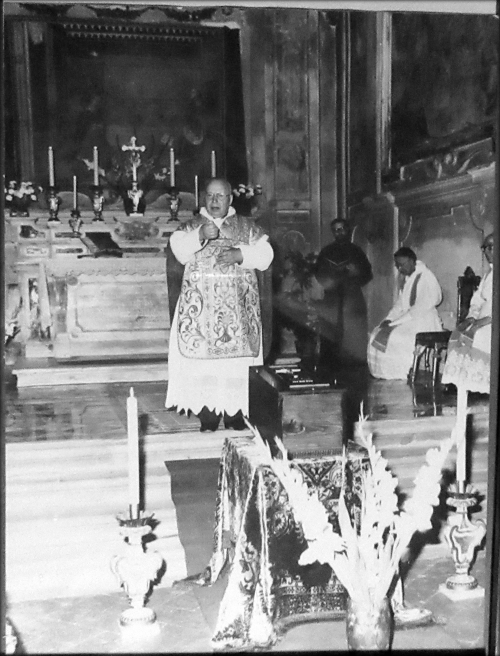 Above: Fr. Gabriel Roschini, O.S.M., Consultant to the Holy Office and the Sacred Congregation for the Causes of Saints,
Giving a Homily During the Burial Mass of Maria Valtorta in the Grand Cloister of the Basilica of the Most Holy Annunciation

The latest (and currently juridically binding) position of the Church is represented by the Congregation for the Doctrine of the Faith’s decision in 1992 to explicitly give permission to Dr. Pisani at the Centro Editoriale Valtortiano (the publishing house of Maria Valtorta’s works) to continue publishing her work as it is without any needed modifications to the text. Thus, the Church has given permission to the publisher to publish Valtorta’s The Gospel as Revealed to Me (also known as The Poem of the Man-God) and has given the faithful permission to read it. This action and permission also implicitly acknowledges that the work is free from error in faith and morals and may be safely read by the faithful.

In addition to this, multiple bishops and ecclesiastical authorities have declared that her work is free of error in faith and morals after having thoroughly examined it. Not only was her work commanded to be published by Pope Pius XII in 1948, but it was approved for publication by the Holy Office in 1961 according to the testimony of Fr. Berti who dealt directly with the Holy Office at the time; and in 1992, Cardinal Ratzinger, then head of the Congregation for the Doctrine of the Faith, gave permission for her work to be published. In a letter dated May 6, 1992 (Prot. N. 324-92), addressed to Dr. Emilio Pisani (the publisher of Maria Valtorta’s works), Bishop Dionigi Tettamanzi, secretary to the Italian Episcopal Conference, gave permission for the work to continue to be published for the “true good of readers and in the spirit of the genuine service to the faith of the Church.” (Pro e contro Maria Valtorta (5th Edition), Centro Editoriale Valtortiano, 2008, pp. 263-265). Dr. Pisani relates concerning this letter:

Our comment immediately points to the conclusion that the Work of Maria Valtorta does not contain errors or inaccuracies concerning faith and morals; otherwise Monsignor Tettamanzi would have asked the Publisher to correct or eliminate such specific errors or inaccuracies “for the true good of readers.” Monsignor Tettamanzi did not even ask that any form of expression that declares the supernatural origin of the Work be corrected, because he maintained that the only declaration that the Publisher had to make at the beginning of the volumes would be enough “for the true good of readers,” and to act “in the spirit of an authentic service to the faith of the Church”: thereby signifying that the content of the Work is sound. In fact, the Church has condemned books that are contrary to faith and morals and which did not claim to be a revelation or even inspired at all. Approved in content and exonerated in its form. This is how we can sum up the latest position taken by the Ecclesiastical Authority on Maria Valtorta’s Work. Such a position was confirmed verbally to the publisher, Emilio Pisani, in the Palace of the Holy Office at the Vatican, 30 June 1992. On that occasion, he learned that the letter of the Secretary General of the CEI [Italian Episcopal Conference] had been suggested by an office of the Congregation for the Doctrine of the Faith, as it had been decided “on High” that the Work of Maria Valtorta could be read by everyone “like a good book.”


Note that in each country, it was the secretary of the episcopal conference who transmitted the official position of the Church on such works. Regardless of the reason that the first edition was placed on the Index, the placement of the first edition on the Index of Forbidden Books was effectively nullified by those who approved the second and subsequent editions. Her writings cannot be considered condemned or forbidden for contemporary Catholics.

The extensive Mariology contained in The Poem was also the subject of a 400-page study written by arguably the greatest Italian mariologist of the twentieth century and Consultor of the Holy Office, Rev. Gabriel Roschini, O.S.M. In a letter of January 17, 1974, Father Roschini received the congratulations of Pope Paul VI for his work entitled, The Virgin Mary in the Writings of Maria Valtorta. The letter from the Secretary of State notes, "The Holy Father thanks you wholeheartedly for this new testimony of your respectful regards and wishes you to receive from your labor the consolation of abundant spiritual benefits." Neither the papal benediction granted by Pope Paul VI nor the papal congratulations issued through the Secretary of State would have been granted to a text based on a series of private revelations which were "forbidden" or declared "doctrinally erroneous" by the Congregation for the Doctrine of the Faith.


Maria Valtorta’s work or parts of her work have also received imprimaturs from multiple bishops, and Bishop Roman Danylak, S.T.L., J.U.D., issued a letter of endorsement of the English translation of The Poem of the Man-God. (Note that he has a License in Sacred Theology and Doctorates in both Canon Law and Civil Law from the Pontifical Lateran University in Rome). The conclusion of his letter states: “This major work of Maria Valtorta, The Poem of the Man-God, is in perfect consonance with the canonical Gospels, with the traditions and the Magisterium of the Catholic Church.” Bishop Roman Danylak also wrote:

“I have studied The Poem in depth, not only in its English translation, but in the original Italian edition with the critical notes of Fr. Berti. I affirm their theological soundness, and I welcome the scholarship of Fr. Berti and his critical apparatus to the Italian edition of the works. I have further studied in their original Italian the Quaderni or The Notebooks of Maria Valtorta for the years from 1943 to 1950. And I want to affirm the theological orthodoxy of the writings of Maria Valtorta.”


Furthermore, if Maria Valtorta’s work contained an error against faith or morals or was condemned by the Church, most faithful Catholics would be inclined to think that the Magisterium wouldn’t beatify or canonize individuals who have been known to publicly read and support her work such as Fr. Gabriel Allegra, O.F.M. (beatified in 2012), who wrote extensively in favor of her writings; Mother Maria Inés Teresa of the Most Blessed Sacrament (beatified in 2012), who avidly read Valtorta’s work and sent her writings to her 35 missionary houses around the world; and Mother Teresa of Calcutta (canonized in 2016), about whom Fr. Leo Maasburg has testified that she carried Valtorta’s work with her during her travels, and that she read it and recommended him also to read it. There is also evidence that Padre Pio of Pietrelcina (canonized in 2002), Pope Pius XII (declared Venerable in 2009), and George La Pira (declared a Servant of God in the 1980s) also approved of Maria Valtorta’s work.

As far as a more thorough approval beyond permission to publish her writings and the imprimaturs that various bishops have given to her work or to anthologies of her work, the Church has not yet investigated Maria Valtorta’s person and writings and ever pronounced a statement in a canonical or ecclesiastical form of an official and universally binding decree of the Congregation for the Doctrine of the Faith as to whether it is of supernatural origin; and so Catholics are free to form their own opinion as to the supernatural character of her writings. Many bishops, renowned Catholic theologians, prominent Catholic lay faithful, and even a beatified person have publicly affirmed their belief in the supernatural character of her writings, and they and all Catholics are entirely at liberty to do so.

Further details and documentation regarding all of these things can be found in the chapter of this e-book entitled, “Statements and Actions of the Popes, the Congregation for the Doctrine of the Faith (the Holy Office), and the Vatican Newspaper on Maria Valtorta’s Primary Work”.